Menstrual Cycle
Every month reproductive changes take place in a woman’s body. These changes are called the menstrual cycle. For most women in the middle of their reproductive years their menstrual cyce is between 21 and 35 days long, with 28 days being the average. It is common for cycle lengths to vary from woman to woman and from cycle to cycle.

The menstrual cycle is under the control of a variety of hormones produced by the hypothalamus (brain), pituitary gland and ovaries. It is divided into four distinct phases. 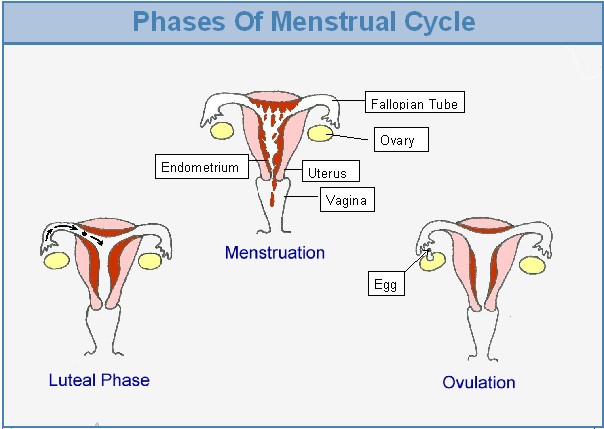 Menstruation
Day one of your menstrual cycle is the first day of menstrual bleeding (your period). During this phase, which typically lasts from three to five days, the lining of the uterus (endometrium) breaks down and passes out the vagina as menstrual blood.

Follicular phase
The follicular phase extends from the first day of menstruation until ovulation occurs. The length of this phase can differ from cycle to cycle and in women with longer cycles it is the follicular phase that is extended. During this phase the brain produces a hormone called gonadotrohin. This signals the pituitary gland to produce another hormone called Follicle Stimulating Hormone (FSH). FSH stimulates the ovaries to begin ripening around five to 20 follicles, each of which contains an immature egg. As the follicles develop they produce increasing amounts of the hormone estrogen. Rising estrogen levels stimulate growth in the tissue and blood vessels that line the uterus in preparation for receiving a fertilised egg. As estrogen levels increase, this cuts down the production of FSH so that usually only one follicle will fully ripen to release a mature egg. The increasing estrogen levels eventually reach a level where they signal to the brain that the egg is ready to be released.

Persistently high levels of Follicle Stimulating Hormone (greater than 25mlU in urine) may be an indication of disruption to the normal menstrual cycle, due to the onset of menopause or some other underlying medical conditon. FSH tests are designed to detect elevated level of FSH and are available from our online store.

Ovulation
Ovulation is the release of a mature egg from its follicle on the ovary surface. Typically this occurs around two weeks before the onset of menstruation. Under the influence of higher levels of estrogen, the cervical mucus becomes thin and watery and the cervix softens and widens. Recognising the elevated estrogen levels prior to ovulation, the brain sends a message to the pituitary gland to produce a surge (massive amounts) of FSH and luteinising hormone (LH). This surge lasts for approximately 24 hours. The higher levels of LH trigger the follicle to burst 24-36 hours after the LH surge, releasing the mature egg into the fallopian tube. Ovulation predictor tests are designed to detect this LH surge. These can be purchased from our online store. On its release the egg is guided into the fallopian tube and gently swept towards the uterus. The egg can only survive for approximately 12-24 hours and so must meet and be fertilised by a sperm on its journey to the uterus if it is to develop into an embryo. This is the optimum time for fertilisation to occur.

Luteal phase
The luteal phase, which is often referred to as days past ovulation (DPO) begins on the day after ovulation and runs through until the day before menstruation. This phase is usually between 12 and 16 days long, with 14 days being the average. Unlike the follicular phase, the length of a woman’s luteal phase remains fairly constant from cycle to cycle and is therefore extremely important in determining when ovulation is likely to occur. For information on how to calculate the length of your luteal cycle visit the Your Fertility section of the website.

After the egg is released the remainder of the follicle transforms into a corpus luteum. The corpus luteum begins secreting the hormones progesterone and estrogen. The progesterone prepares the lining of the uterus to receive a fertilized egg and is responsible for the slight increase (0.2 C) in basal body temperature that occurs during this phase.

If the egg has met and been fertilised by a sperm on its journey to the uterus, it will continue developing as it travels along the fallopian tube. When it reaches the uterus, the embryo will gradually sink into the thick lining of the uterus (termed implantation) where it will continue to grow and develop until birth. Typically, implantation occurs six to 10 days after ovulation. Some women experience a slight spotting of blood at this time. This is known as implantation bleeding. After successfully implanting in the lining of the uterus the embryo signals its existence to the body by producing a hormone called human chorionic gonadotropin (hCG). hCG signals to the corpus luteum to continue producing progesterone, which is essential for the continued development of the implanted embryo. Pregnancy tests work by detecting the hCG hormone in the woman’s urine.

If the egg is not fertilised and without the presence of hCG the corpus luteum degenerates. Progesterone levels fall making the uterine lining unstable and menstruation begins. A new cycle then begins.

“So very informative and knows her stuff. Much better product and instructions (ovulation tests) that what I have purchased off others”

“Thank you very much! Parcel arrived today! I love the baby dust! You guys do a really special thing here!! ”

“Wow what awesome service & love the little “baby dust”. Thank you SO much for helping me in my journey! 🙂 The package arrived this afternoon – such a speedy delivery! Thank you. I have found your website useful already. A friend recommended it a few months back! Thanks! 🙂

“i would like to thank you for having this web site. I came across it  and found the information on your site very helpful when me and my husband were trying for a baby (as i knew nothing and didn’t understand my cycle) i would like to let you knows that it works and i am now 13 weeks pregnant (due Oct/Nov), my husband is over the moon and as am i. So thank you very much you helped us have family that we so darely wanted.”

“I ordered some OV sticks from you guys recently. Was my first time ordering off this site and i just wanted to say how very impressed i was at the service i received! The purchasing was easy and i received my package within 3 days i think it was so was stoked! The addition of the baby dust was just SO sweet and shows u guys really care. Thanks again! 🙂 I’ll be recommending you to others for sure! ”

The Ovulation Kit I ordered arrived this morning. I just wanted to thank you for all the nice things in it. The stickers are gorgeous, and the baby dust is cute. It was just so nice to get something from someone who “gets it”! After buying many ov kits, preg kits, tablets and the like, it gets not only costly, but very clinical. Thanks for understanding that it’s personal. Bless ya heaps,.”

“Hi there, I just wanted to mention what an excellent service you provide. I have ordered a few things now and it is hassle free with such fast delivery!Many thanks,”

Just a huge extra special thanks for sending us the special dust with our purchase, what a awesome surprise, it arrived when I was at my parents and the joy in there face when they could hear the heartbeat of there unborn grandchild was amazing. Thanks for going the extra mile, it certainly is a special touch that put a smile on our faces!!!

Just writing to let you know i have received the tests today! Thankyou very much for your fantastic service and will definately be ordering for you guys again if i need something else!

I purchased some ovulation strips from you a few months ago. I was so excited when the package turned up and it even had some cute baby dust in it! I thought that was such an awesome touch. I am now 14 weeks pregnant (in the first month of trying!) with the help of those strips!! What i have found awesome, is the fact that i swear that baby dust is magic LOL! After i got my postitive pregnancy test, i sent the baby dust to one of my friends who was trying for a baby also. Within that one month of her trying, she had a positive pregnancy test too! So she then sent the baby dust to another one of our friends who was also trying for a baby (bit of a baby boom going on i feel ) and we have just heard today, that she has also got a positive pregnancy test within her first month of trying too! So i just wanted to say a huge thank you from three expecting mummies.

Thanks a lot for the great customer service when I bought the ovulation microscope last year. Once I ovulated, it worked a treat. I discovered another use for it. It detects pregnancies as well – if it does not stop ferning, it means you are pregnant 😉

Every fertility product ordered comes with a packet of our beautiful good luck baby dust. Plus a handy pocket calendar to help record cycle lengths and determine dates.