At Baby 4 You we have three urine based ovulation test formats for you to choose from – strips, cassettes and midstreams in the industry standard 25ml/U detection range. Or the David higher sensitivity 10ml/U ovulation test strips.  In addition to our own high quality low cost brands as shown below we also stock the Clearblue Digital Ovulation Tests

BEST VALUE. The most economical of our testing options available making them ideal for those with lengthy or irregular cycles and for those who find they like to test more than once a day. 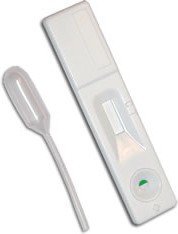 Patient ID platform ideal for those wishing to record data and results.

Ideal for those requiring sample free, fast discrete testing. Can be taken with you and used anywhere.

David High Sensitivity Ovulation 10ml/U Tests
Woman have Luteinizing Hormone (LH) present throughout their cycles and in woman of reproductive age this level will normally be somewhere are the 5-20 mIU/ml range.  When the surge occurs the basal level rises to approximately 50-200 mIU/ml and at this level the process of ovulation will normally be initiated. There are however some exceptions to this included in which is a small proportion of women who have no known fertility issues yet ovulate (as confirmed by scan or 21 day progesterone’s) on very low levels of LH (under 20mlU) at peak. For woman such as this the lower range i.e 10-15mlU ovulation tests are the better option and for this reason we are now offering the higher 10ml/U sensitivity David Ovulation Tests on our website.

However please be aware that these tests are not suitable for all groups of woman. For instance woman in the older age group or those with conditions such as PSOC can have resting LH levels at 15mlU and above and hence if they tested their urine they could potentially get a positive reading at all stages of their cycle. In this instance the concerning thing is that in not knowing this they would simply start using them at the recommended time, get a positive straight away and presume it was a sign that they are ovulating, when in fact they may well not be and there is the potential for fertility issues to go unnoticed. It is for this reason that we advice caution in the use of the higher sensitivity tests and recommend that in order to avoid the potential for false positives that the majority of woman and in particular those with diagnosed fertility conditions, in an elder age bracket or with elevated LH hormone remain with the standard 25ml/U testing option.

Ovulation tests or Ovulation Predictor Kits (OPKs) work by detecting the level of Luteinising Hormone (LH) in a woman’s urine. Unlike some other methods for predicating ovulation OPKs are useful in that they anticipate when ovulation is about to occur rather than simply confirming that it has already taken place.

Throughout the menstrual cycle a small amount of a hormone called Luteinising hormone (LH) is produced. Approximately 24-36 hours before ovulation the body briefly produces a large amount of this hormone. This large release of luteinising hormone is referred to as the ‘LH Surge’. The LH surge triggers ovulation, which will typically occur within the next 24-36 hours.

Ovulation predictor tests are designed to detect these higher levels of luteinising hormone (>25mIU) which occur during the LH surge.

Ovulation predictor tests are quick and easy to use and come in a variety of styles including strips, tiles and midstream. When to begin testing is determined by the length of your cycle. Typically, testing starts three days before your estimated time of ovulation. For example, you should begin testing on Day 11 of your cycle if you have a 28 day menstrual cycle or Day 15 if you have a 32 day cycle. Continue carrying out one test mid-afternoon over the next five days, or until a positive result is obtained.

Contraindications:
If you are menopausal, taking fertility drugs, oral contraceptions or medicines containing HCG or LH this can affect the test results. Woman with diagnosed hypothyroidism or fertility problems should consult their doctor prior to use. If you have PCOS and elevated LH is one of your symptoms of PCOS then you can get false positives or misleading results. In the event that you have irregular cycles, absence of periods or have been trying to conceive for over six months without success we recommend that you consult with your physician.

All tests come with detailed instructions, additional testing tips and frequently answered questions which you should familiarise yourself with before beginning testing. For your convenience these can be downloaded below:

“So very informative and knows her stuff. Much better product and instructions (ovulation tests) that what I have purchased off others”

“Thank you very much! Parcel arrived today! I love the baby dust! You guys do a really special thing here!! ”

“Wow what awesome service & love the little “baby dust”. Thank you SO much for helping me in my journey! 🙂 The package arrived this afternoon – such a speedy delivery! Thank you. I have found your website useful already. A friend recommended it a few months back! Thanks! 🙂

“i would like to thank you for having this web site. I came across it  and found the information on your site very helpful when me and my husband were trying for a baby (as i knew nothing and didn’t understand my cycle) i would like to let you knows that it works and i am now 13 weeks pregnant (due Oct/Nov), my husband is over the moon and as am i. So thank you very much you helped us have family that we so darely wanted.”

“I ordered some OV sticks from you guys recently. Was my first time ordering off this site and i just wanted to say how very impressed i was at the service i received! The purchasing was easy and i received my package within 3 days i think it was so was stoked! The addition of the baby dust was just SO sweet and shows u guys really care. Thanks again! 🙂 I’ll be recommending you to others for sure! ”

The Ovulation Kit I ordered arrived this morning. I just wanted to thank you for all the nice things in it. The stickers are gorgeous, and the baby dust is cute. It was just so nice to get something from someone who “gets it”! After buying many ov kits, preg kits, tablets and the like, it gets not only costly, but very clinical. Thanks for understanding that it’s personal. Bless ya heaps,.”

“Hi there, I just wanted to mention what an excellent service you provide. I have ordered a few things now and it is hassle free with such fast delivery!Many thanks,”

Just a huge extra special thanks for sending us the special dust with our purchase, what a awesome surprise, it arrived when I was at my parents and the joy in there face when they could hear the heartbeat of there unborn grandchild was amazing. Thanks for going the extra mile, it certainly is a special touch that put a smile on our faces!!!

Just writing to let you know i have received the tests today! Thankyou very much for your fantastic service and will definately be ordering for you guys again if i need something else!

I purchased some ovulation strips from you a few months ago. I was so excited when the package turned up and it even had some cute baby dust in it! I thought that was such an awesome touch. I am now 14 weeks pregnant (in the first month of trying!) with the help of those strips!! What i have found awesome, is the fact that i swear that baby dust is magic LOL! After i got my postitive pregnancy test, i sent the baby dust to one of my friends who was trying for a baby also. Within that one month of her trying, she had a positive pregnancy test too! So she then sent the baby dust to another one of our friends who was also trying for a baby (bit of a baby boom going on i feel ) and we have just heard today, that she has also got a positive pregnancy test within her first month of trying too! So i just wanted to say a huge thank you from three expecting mummies.

Thanks a lot for the great customer service when I bought the ovulation microscope last year. Once I ovulated, it worked a treat. I discovered another use for it. It detects pregnancies as well – if it does not stop ferning, it means you are pregnant 😉

Every fertility product ordered comes with a packet of our beautiful good luck baby dust. Plus a handy pocket calendar to help record cycle lengths and determine dates.